At Lancaster University I've been working on an energy project for schools.
Here's one of the experiments the students can reproduce using a micro:bit and a magnet.

Code the micro:bit before sticking everything to the door.

Find your range
The micro:bit can measure magnetic force strength. We need to know

When you download the code, the micro:bit will calibrate itself by asking you to draw a circle. Tilt the micro:bit around until you've drawn a circle using the lights on the front.

When the magnet was away from my micro:bit, the value was 40. Sometimes it was 39, 38. So here's my code to record the number of times a door is opened: 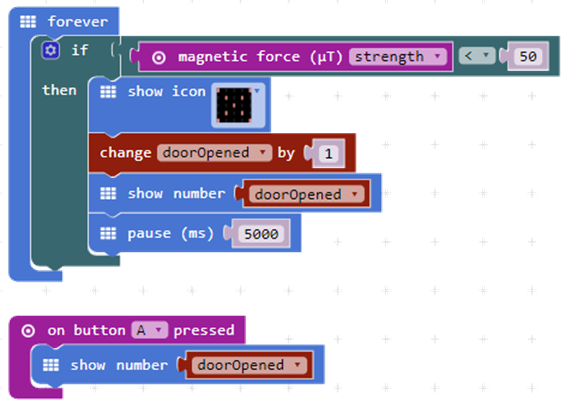 Instructions on how to recreate the code:

I paused the micro:bit for 5 seconds (5000 milliseconds) to allow the door to close before recording another door open. How long does it take for your door to close? How often do people keep the door open for?

This experiment was used with others to try and help schools save money. A student would record the number of times the door was opened each day and reset it to start recording the next day. They would display the information each day and try to change behaviours so the door wouldn't be opened as much.