Every week I run a Code Club in my sons' school and a CoderDojo at the university that I work at.

I've been telling them about Coolest Projects and encouraging them to attend and submit a project if they want.

Because the Code Club only started in November and the CoderDojo in January most have opted not to submit a project due to the time restraints and not knowing what Coolest Projects actually is.

Today my eldest son decided he wanted to submit a project! The deadline is tomorrow :)

He's decided he wants to build a remote controlled robot car, just like my micro:bite

I'm REALLY trying to be hands off with this project as it's his entry. I try to ask questions like: "what's next? How do we do that?" Instead of "let's 3d print it!"

He is just 6... which is lower than the age guidelines for CoderDojo and Code Club. I want him to love coding and making without pushing it on him and so far, it's working. I make things, I show them to him, he really enjoys them. Sometimes he'll ask to make something and we do something small together. Typically he'll lose interest quickly or what he wants to make is beyond my skill level (helicopter!)

This will be our first big project together. I just hope he doesn't get disappointed if it's not accepted to Coolest Projects and/or it doesn't win a prize. He's a really competitive 6 year old!

We've started with the chassis. He found a box he likes but thinks it's too heavy. He wants his robot to be blue. So he wants me to laser cut the chassis for him. I said that's fine but he needs to work out the measurements and create the file.
Here he is drawing around the box then using a ruler to measure the lines. (Not how I'd do it, but hey - it worked!) 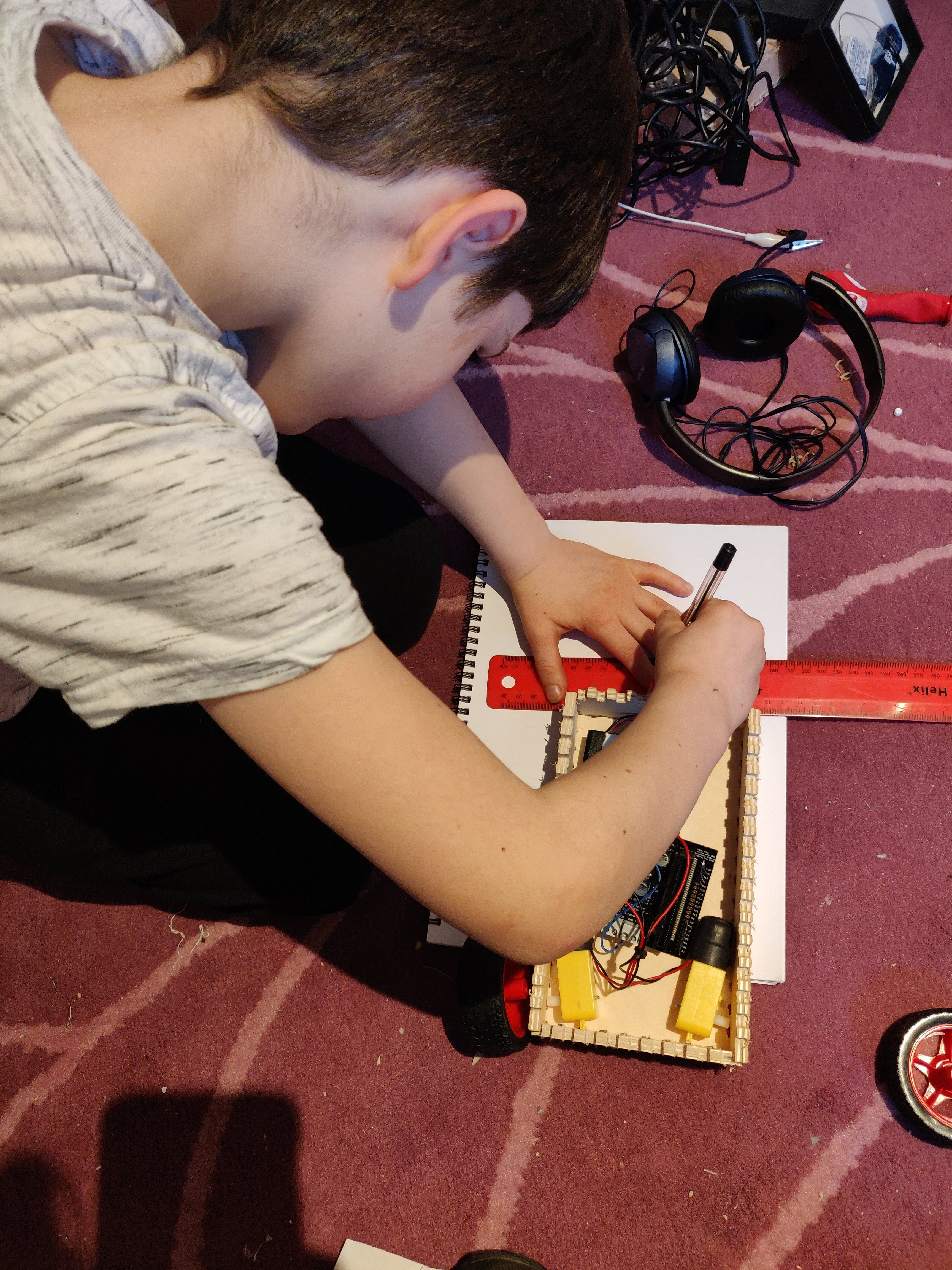 Here is creating the box on LightBurn. I showed him how to use the software here. He created the bottom, side and front rectangles using his measurements. He decided to make his box taller than the box we had measured.

When I asked how he's going to assemble the box he said cellotape. I'm REALLY biting my tongue here. I'm not pointing out the box he's copying is cut to be connected together or other method of joining pieces together.

This. Is. His. Project

We brought the laptop down to the basement and he watched his pieces being cut - under strict parental supervision! 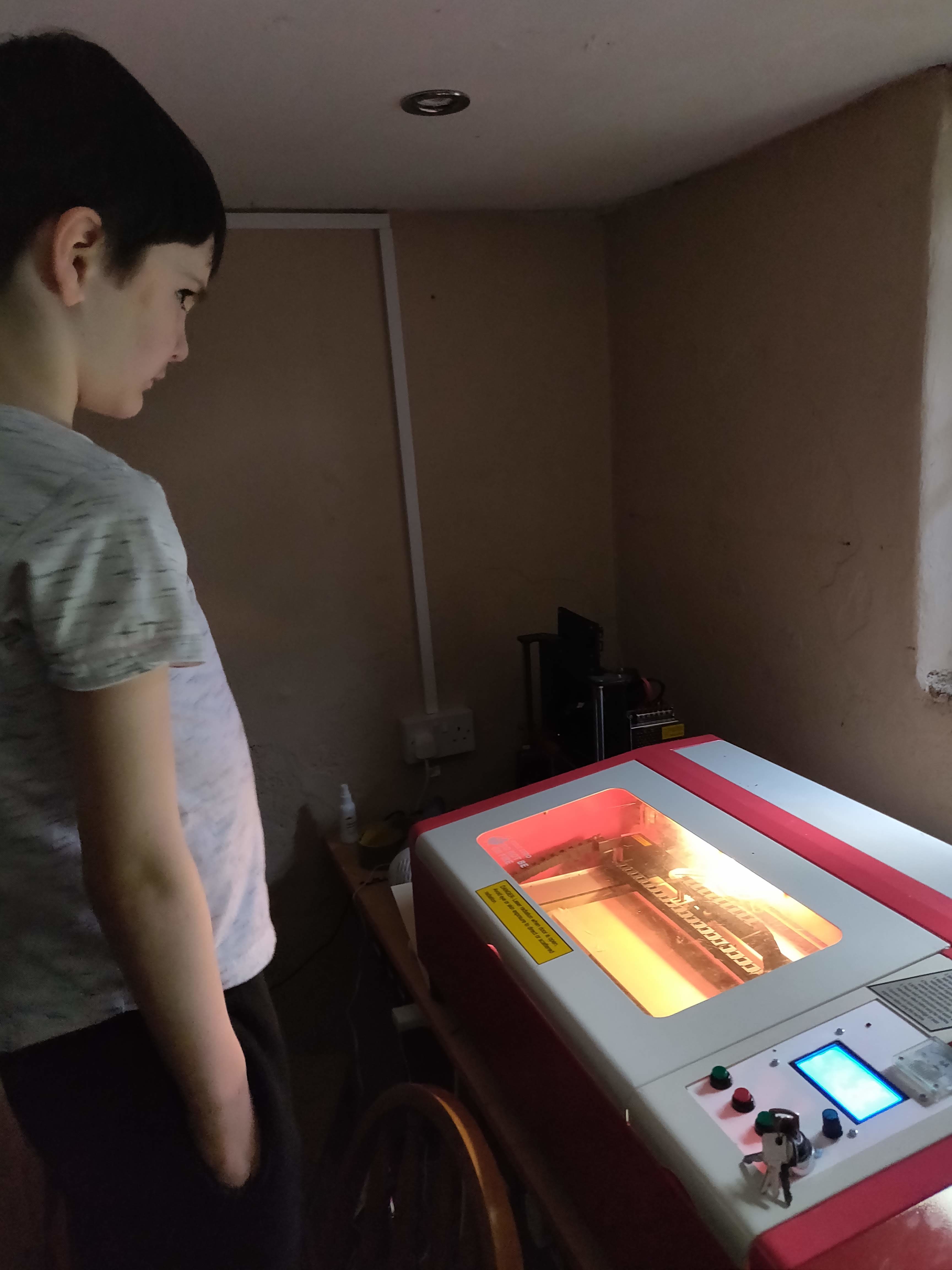 In the dining room we assembled the chassis with packing tape. I showed him all the tape we had in the house: cellotape, masking tape or packing tape. He decided packing tape would be stronger.

And here we have prototype 1: 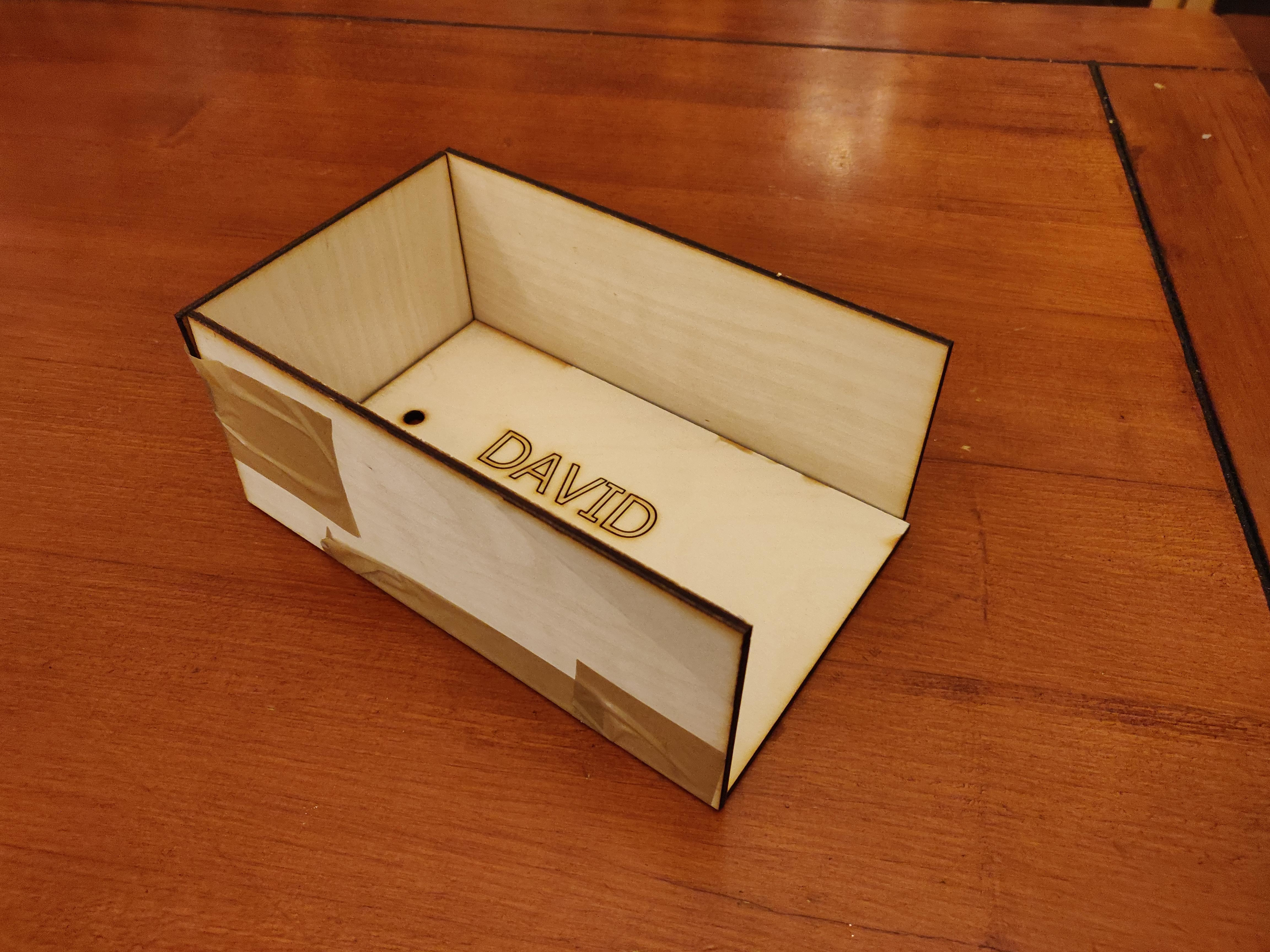 The hole at the front is for the third wheel. He copied that from micro:bite. Tomorrow, if there's time and he's interested, we'll put the motorboard and battery in then he'll realise we need a hole for the motors/wires in the side panels. We'll either drill them or laser cut box numero 2. His choice!

So far, we're having a great time!