The local village has an annual sport's day that starts (oddly!) with a fancy dress competition. The sport's day was on Saturday, I decided to make a costume on Thursday! After watching far too much Lucifer and also being pretty excited by Good Omens, I decided to go with some angel wings.

My requirements for the wings were they had to be:

Initially I didn't think I'd have time to get them moving but after some searching I found a great video on YouTube which describes how to create a manual moving frame of wings that are light weight.

I followed this video:
https://www.youtube.com/watch?v=y3Hw9Sasl8Q&t=11s

My wood was a bit thicker than theirs but I used their measurements and instructions to create the wing frame. My bolts were also a lot longer, I had to hack off most of them but kept the top and bottom middle bolts long.

Here's the frame at its narrowest: 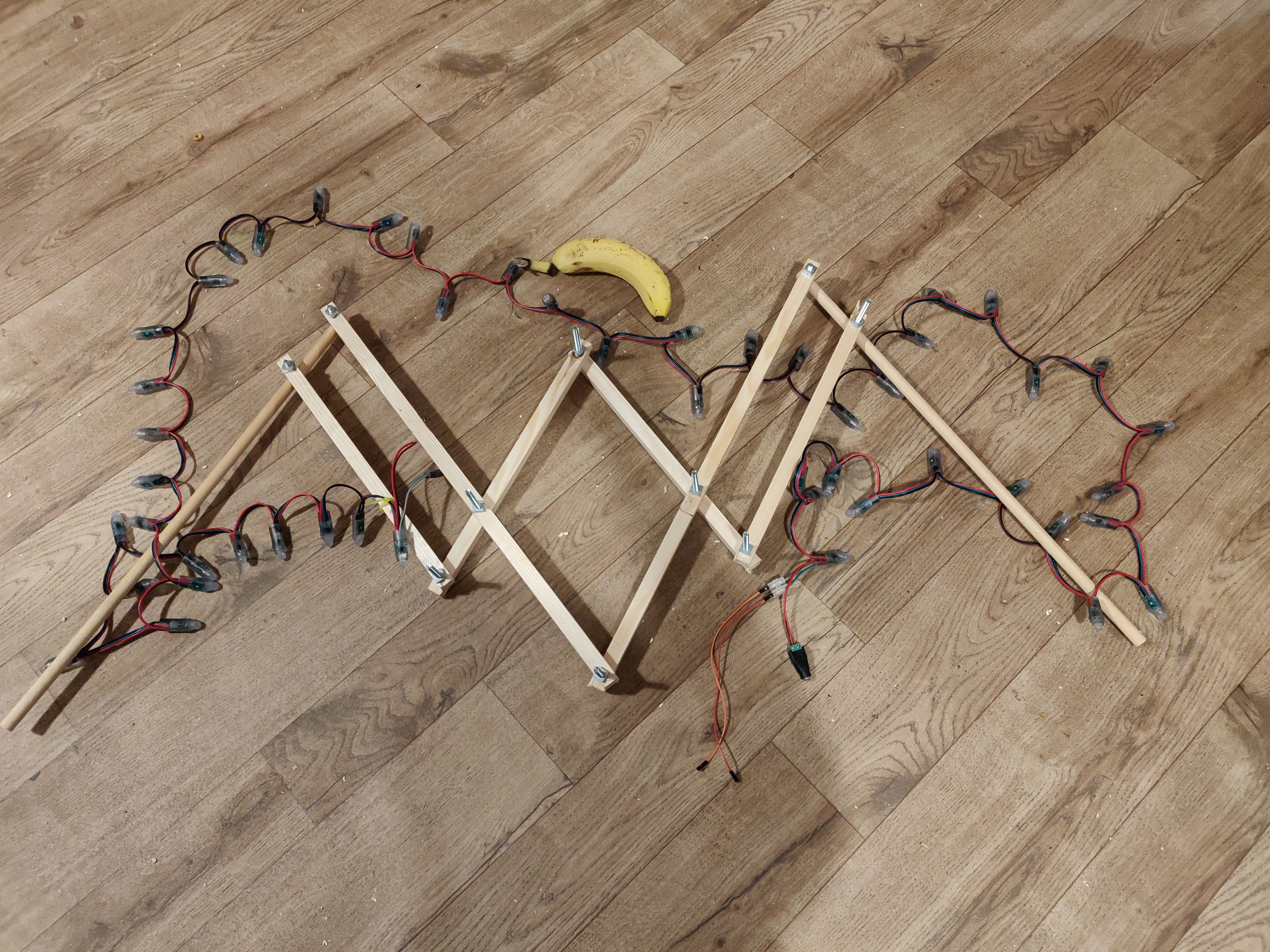 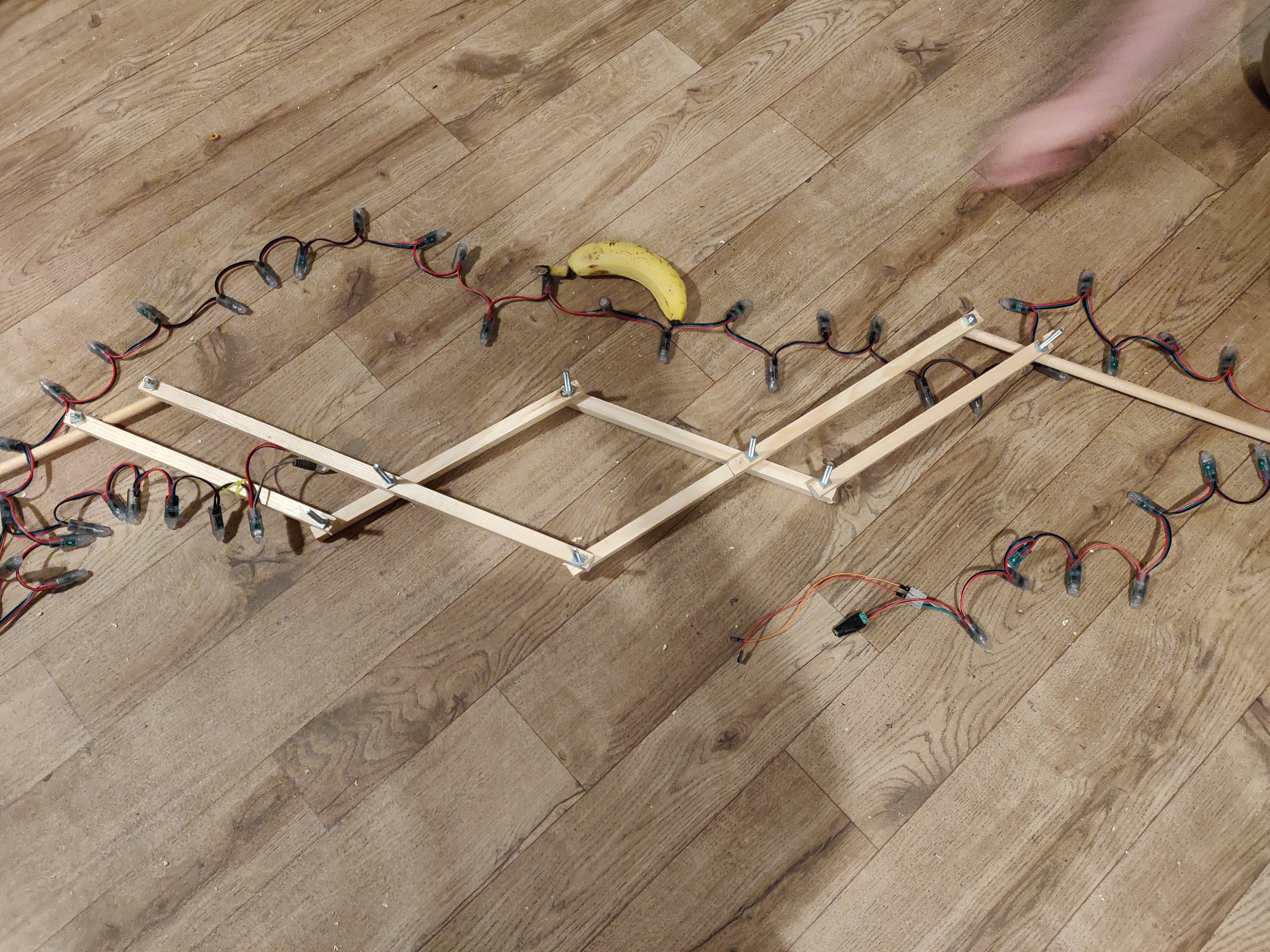 In their video they attached it to a backpack, which is a great idea! I decied to do the same. I attached a piece of wood to the top bolt and hooked it into a small rucksack leaving the bottom bolt free to push and pull to move the wings.

I used 50 RGB LEDs in a string wrapped around the frame. These are the lights:
https://www.amazon.co.uk/dp/B00MXW054Y

They're quite chunky but are waterproof and I've worked with them before.

I used a powerbank to power both the light strip and the micro:bit.

NOTE: you are advised against doing this for the micro:bit! You might be better with the normal micro:bit battery pack. 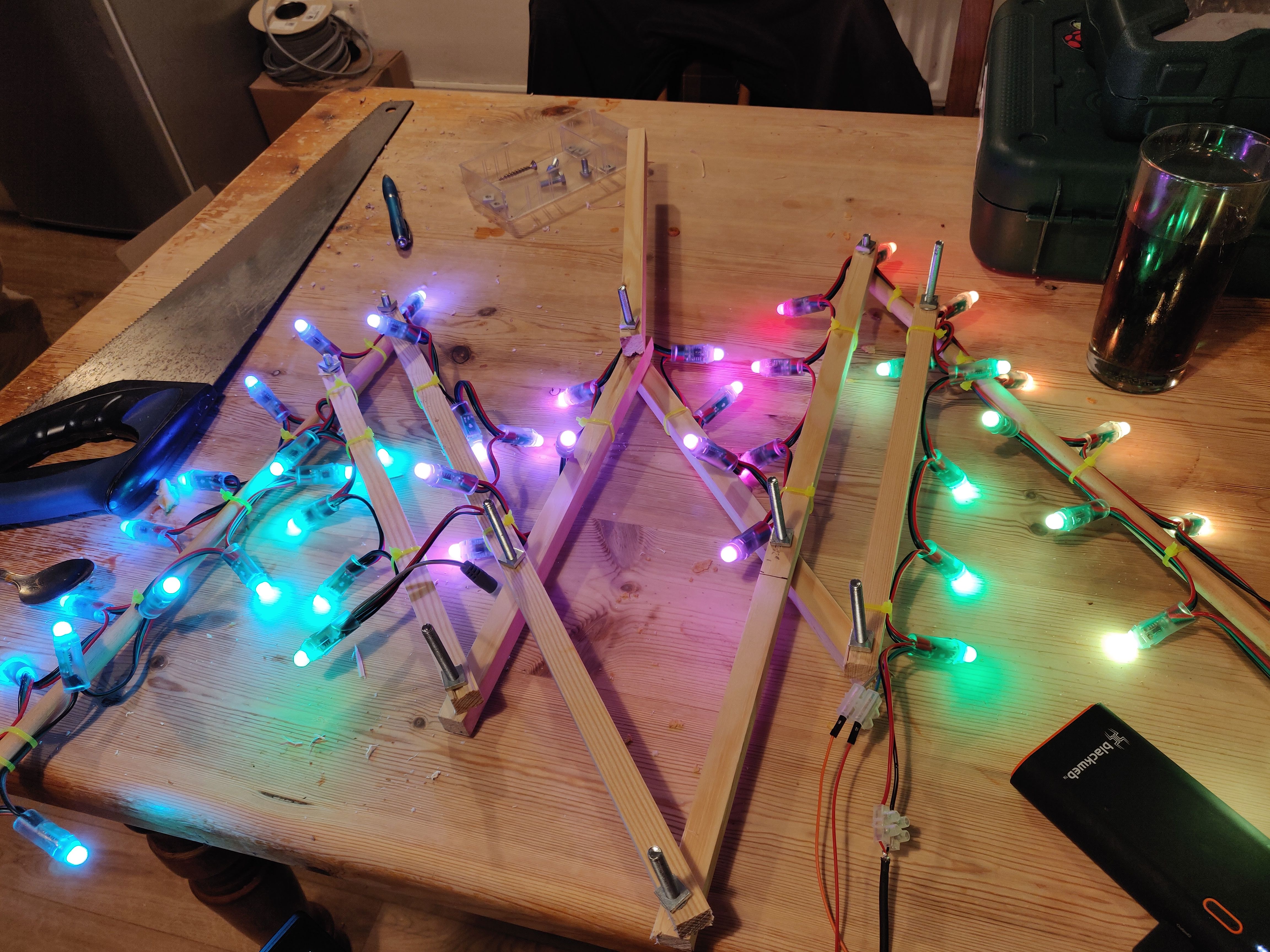 I used a shower curtain for the feathers. This took a few attempts. I had to cut different lengths out, stick them onto the frame and open and close the frame to see how they moved/looked. I just used simple cellotape to stick on the feathers to the frame. 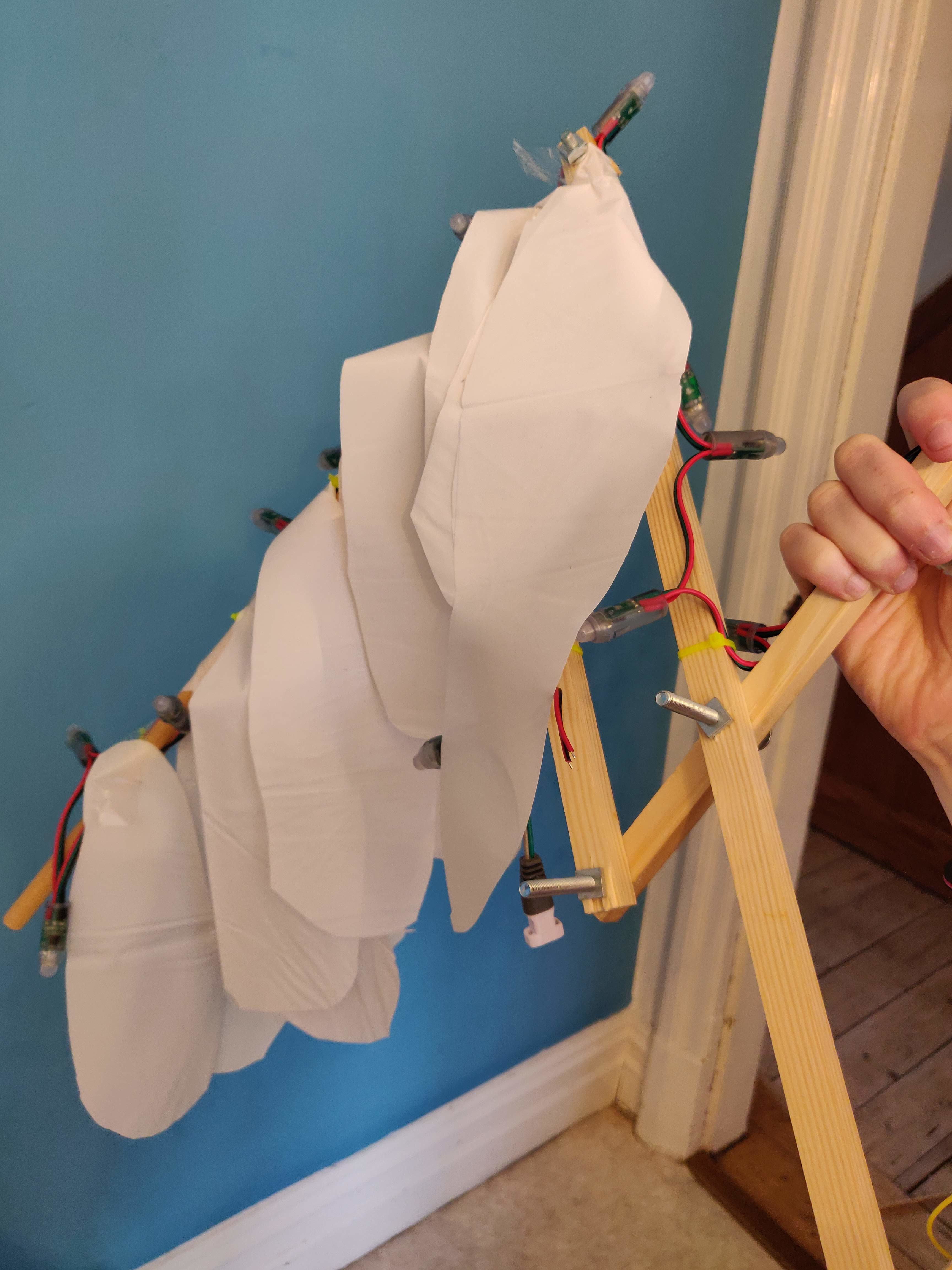 The code doesn't have to be complicated! Mine is a bit complicated, I use functions and arrays. You need to add the Neopixel menu (Advanced > Extensions) to get these lights working.

Button A: The wings turn on, one light at a time, from the two edges
Button B: The lights start very faded red and get bright and brighter, flashing randomly - devil wings!
Button A and B: turns all the wings into a rainbow pattern 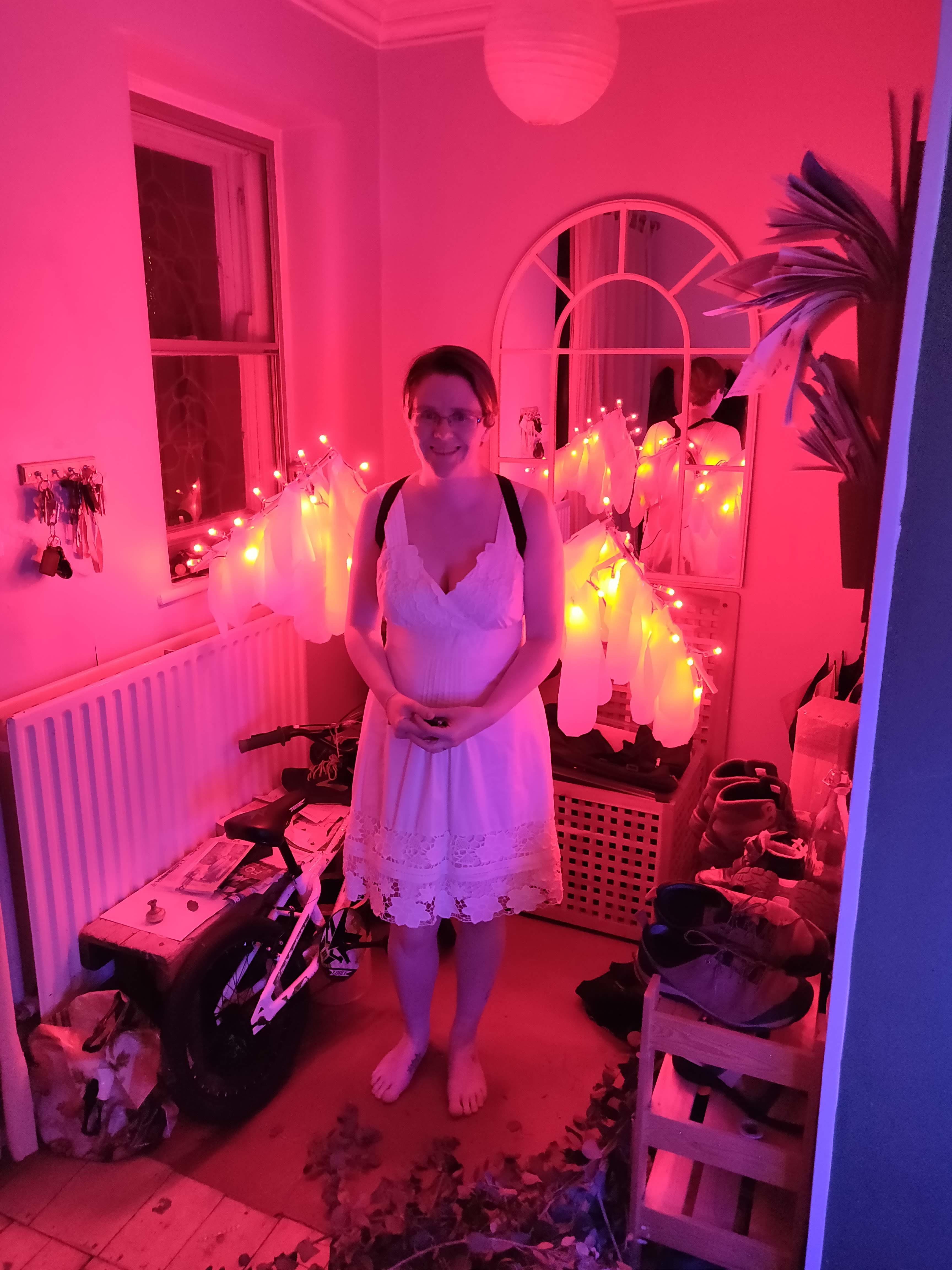 Attach RGB LEDs to the micro:bit